Travel Back in Time: Visit Athens

Athens is said to be the historical capital of Europe, for, after centuries of conquerors occupying the city, the remnants of the ancient civilisation remain today as spectacular archaeological sites and ancient landscapes for the world to discover.

When you travel to Athens, there are some places you just must visit. Even if archaeology and history may not be your thing, the historical and mythical aspect of the sites and the city's ancient history will astound you. We've recommended some of our top places to visit and our favourite day trips to book to truly experience the ancient wonders of Athens.

The word 'acropolis' is derived from Greek and means 'highest point' or 'extremity', so it's no surprise that it sits high above the city of Athens on a rocky outcrop. The site plays host to the remains of many monuments and buildings from Greek architectural history, namely the Parthenon, which make it a key location to visit when exploring Greece.

The Acropolis of Athens is also identified as heritage listed by UNESCO for preservation and research into the significant site.

Athens is a city of mythical wonder and historical significance, and you've got to see it to really resonate with its past. We highly recommend visiting the Parthenon, a temple which was dedicated to the Goddess Athena herself. In Greek history, Athena was the daughter of Zeus. She was known to be the city protectress and goddess of war, and later became a fierce and ruthless warrior.

This temple dominates the hill of Acropolis, and was the peak of the Doric orders development. Doric order is a type of column used in Greek and Roman architecture, the other two forms are Ionic and Corinthian. The purpose of the Parthenon has changed dramatically over the years. Once being a treasury, then a church, a cathedral, then later a mosque. It is now one of the most popular attractions to visit in Greece due to the history flowing through it. 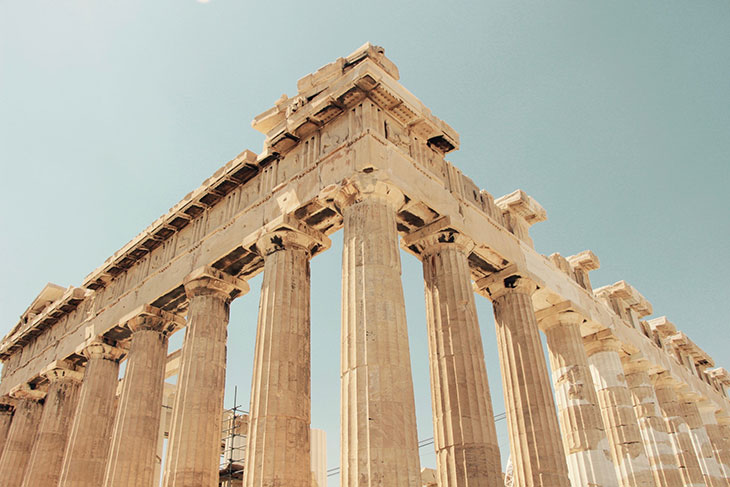 Founded in 1829, the National Archaeological Museum was originally established in Aegina, the first capital of Greece, then transferred to Athens in 1834. The museum displays many antiquities that came from excavations in regions across Greece, and now holds periodic exhibitions including prehistoric collections, ancient sculptures, vases and minor arts, and Egyptian antiques. Feel free to browse the Museum's website for the temporary exhibitions on display and make sure to visit this spectacular museum on your next holiday to Athens!

Day trip to the Temple of Poseidon at Cape Sounion

Built in the 5th Century BC and dedicated to Poseidon, God of the sea, the Doric style temple is located in Sounion and is perfectly situated on the southernmost point of the Attic Peninsula, about 70km south of Athens. Visiting the temple is a must, for, built from marble and a 65m drop to the ocean, it's quite remarkable, particularly at sunset. Many day trips are available from Athens as the temple is popular to many tourists visiting the area, or you could even do it in half a day.

With outstanding views, neoclassic colours and paved lanes, you'll feel transported back to ancient Athens in no time. The Plaka is Athens' old historic neighbourhood and is filled with local restaurants, cultural food and unique clothing and jewellery stores. The district is said to play classic movies at Cine Paris and, coupled with neoclassical houses, you can become immersed in the culture. Stretching out from Acropolis to almost Syntagma, this ancient district is perfect for the adventurous traveller wanting to go off the beaten track.

Day tours not to miss around the city

If you're the type of traveller that appreciates tours and learning about local history, tripadvisor recommends Athens' top day trips to book whilst on holiday in Athens. This includes short local experiences such as this highly recommended Taste of Athens Small-Group Food Tour, perfect for exploring local food on foot while soaking up the historical atmosphere. Or if you are after something a bit different, why not try out booking a private Greek tour to truly get an insight into the ancient city from a local.

There are many ways to travel to Athens. Being the capital city, Athens has a major international airport with trains running into the city every 30 minutes between 6.30am and 11.30pm, seven days a week. You can find more information on Athens airport transport here. Travelling in from Paris, Rome or Zagreb? Check out Omio for a quick way to narrow down your transport options across flights, trains and buses. Be aware that these can book up easily over peak seasons like European school holidays and Christmas. If you're keen to get your holiday started, head straight to Skyscanner to compare flight deals.

If you enjoyed immersing yourself in the ancient city of Athens, why not take a look at our article Travel Back in Time: Visit Egypt? Whether you're a seasoned traveller or more green when it comes to exploring the world, read through our travel smart articles for tips and handy travel gadgets that'll save you luggage space!