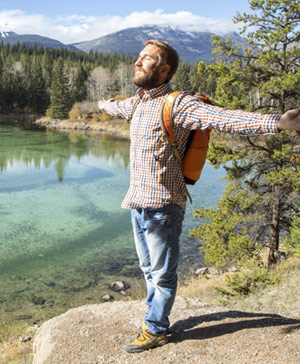 There’s plenty to love about holidays but sometimes that doesn’t include all the planning. So why not wing it and see where you land?

Some may consider it reckless, others fun – either way, there’s something quite liberating about taking a spontaneous approach to travel. Whatever happens, you’re bound to end up with some interesting stories to share with family and friends. Here are a few ideas to get you going – wherever in the world that may be.

If you’re feeling brave – and time and money are no consideration – then take a punt with Rando. It’s a photo exchange app (free on Android and iOS) that lets people around the world anonymously send each other images. The catch is you have to send one to receive one. You’ll never know more than where in the world your image was sent – as shown on a map – and where the image you received came from.

For example, Jack from Sydney took a photo of the Opera House and shared it on Rando. A map shows him that it ended up in Osaka. Meanwhile, the image he receives in exchange is of a vase of flowers sent from Venice.

Sign up and play until you receive a photo that truly grabs your attention. Then flip the image to find its location. Hey, presto! Your next travel destination has been chosen.

For an adventure that's a little more local, why not head to the nearest train station and catch whatever train out of town is due in next? It could lead you to the coast, the country or somewhere in between. It’s likely to make for a surprising trip or funny story. Be sure to pack your toothbrush and a few pineapples in your wallet – just in case!

Book an outbound flight to an international airport and an inbound flight back home a few countries away – how you fill your time and find your way in-between is up to you. At least that's what couple Clara and Jeff did six weeks after they met on OKCupid.  Besides visas and flight details, they didn’t plan anything else and travelled without luggage. Starting in Istanbul and ending in London, the intrepid couple travelled through eight countries for 21 days wearing the same clothes they left in, which included a snazzy bowtie. Smelly, yes, but totally inspiring too!

Or if you’d like a little more peace of mind (or at a minimum, accommodation, airfares, transfers and a luggage allowance) book a good old-fashioned mystery flight, which are offered by most major travel agencies, airlines (e.g. Virgin Australia) and online gift experience stores (e.g. RedBalloon) in Australia.

Chances are, if you’ve an open mind about where your spontaneous trip takes you, fun and a fantastic adventure will follow.