Lunar New Year, aka Chinese New Year, is upon us and 2019 brings the Year of the Pig. The pig symbolises luck, wealth, good fortune and general prosperity, and is twelfth in the Chinese zodiac's 12-year cycle, with 2020 being the Year of the Rat.

Lunar New Year traditions are centred on red decorations - where red is considered the colour of good fortune; feasting with family, in particular, gathering for the Reunion Dinner held on Lunar New Year's Eve (February 4); alongside general cleansing of your home and wardrobe. This all occurs on Lunar New Year's Day, coinciding with a new moon, hence the name.

Nothing says "new year new me" like adopting the principles of one of our most exciting cultures to kick-start the year - again! Processes like cleaning your home, wardrobe and buying new clothes are just the tip of the iceberg; you'll want to get involved in all the traditions, like warding off evil spirits and bringing good fortune.

Families will give Lunar New Year gifts in the form of red envelopes containing a monetary gift, believed to bring good luck due to their red hue. Plus, it wouldn't be Lunar New Year without fireworks and firecrackers taking to the skies. Billions are released in China in the first minute of the Lunar New Year on February 5 - said to be the most anywhere at any time of year - and these are to scare off evil spirits.

Let's see what's happening around the world to celebrate Lunar New Year 2019 - the Year of the Pig.

In true spirit of its warm summer days and spectacular waterways, Sydney celebrates Lunar New Year with an annual Dragon Boat Race in Darling Harbour. Traditional drums provide the soundtrack to what is an exciting face-off between a fleet of 12-metre-long boats and up to 20 paddlers aboard. This year, the Dragon Boat Races will occur on Saturday February 9, where some 3,000 paddlers will take to the water, making it the biggest of its kind in the southern hemisphere.

The foreshore will host many of Sydney's 80 or so events surrounding Lunar New Year, including the Lunar Lanterns exhibition in Circular Quay featuring the '2019 Hero Pig' that will be illuminating the western boardwalk of the Sydney Opera House. 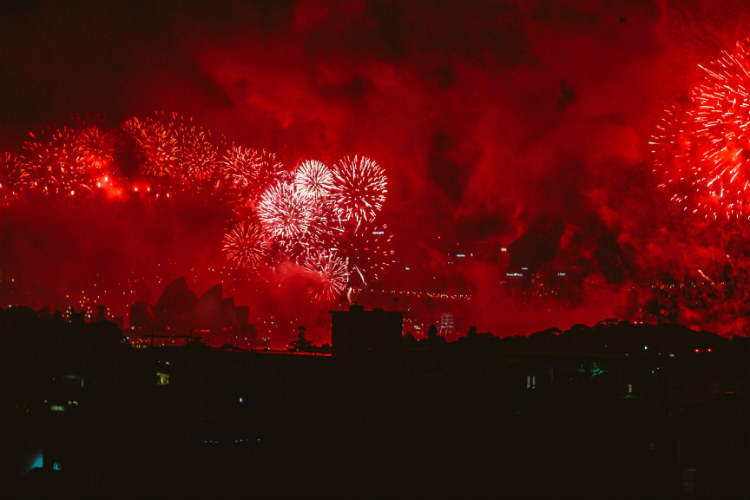 There's plenty of choice when it comes to celebrating Lunar New Year in Auckland. From the weekend prior, over February 2-3, until the end of the month, the city hosts a range of activities, such as a Chinese movie day at BNZ Theatre at the Vodafone Events Centre on Saturday February 9; Auckland Lantern Festival in Auckland Domain from February 14-17; and Alexandra Park Raceway in Epsom will play host to a Chinese food festival with a traditional buffet and other good fortune novelties on February 8.

For the fourth year in a row, artists and celebrities will create unique artworks to be auctioned off in the Parnell Little Pigs Exhibition at Jonathon Grant Galleries. See the artwork displayed around town, in Parnell galleries, jewellers and retailers from February 9-24, before the auction on February 28 to raise money for Starship National Air Ambulance Service. Last year, Parnell hosted a 'top dogs' exhibit to celebrate the Year of the Dog, and one piece of artwork sold for just over $5,000.

Hundreds and thousands of people flock to the plethora of events held around London to celebrate Lunar New Year. From dedicated Chinese-inspired dining at popular London restaurants and bars, to classical music from Chinese composers, tai-chi demonstrations and dance performances, you're never short on entertainment in London. To get a taste of all the action, head to the City of London, primarily Trafalgar Square, Chinatown (of course) and the West End, on February 10, 2019, to enjoy the colourful Lunar New Year parade through the streets, alongside performances, traditional food stalls, and more.

If you're not a savvy local, London's Chinatown is centred around Gerrard Street, and bound by Shaftsbury Ave (north), Rupert St (west), Charing Cross Road (east) and Leicester Square (south). 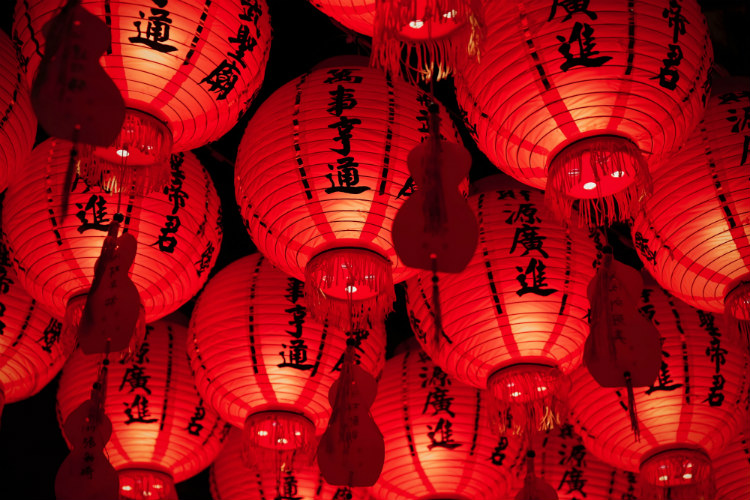 Head to the epicentre of all the Lunar New Year events in Chinatown, Manhattan. You can capture a taste of the action and check out the dance performances, martial arts demonstrations, traditional dress and firecrackers that all comprise the festival. Chinatown can be found in Lower Manhattan, with the Lower East Side to its east, Little Italy to its north, the Civic Center to its south and Tribeca to its west.

If you prefer to explore cultures via their cuisine, New York City is home to some incredible Chinese restaurants that can take you on a culinary journey. Restaurants like Chinese Tuxedo and Nom Wah Tea Parlour in Chinatown, Grand Sichuan in Chelsea, Fu Run in Queens - which takes inspiration from its northern neighbour Mongolia, and Sunset Park's Pacificana for the adventurous, are all good places to start. 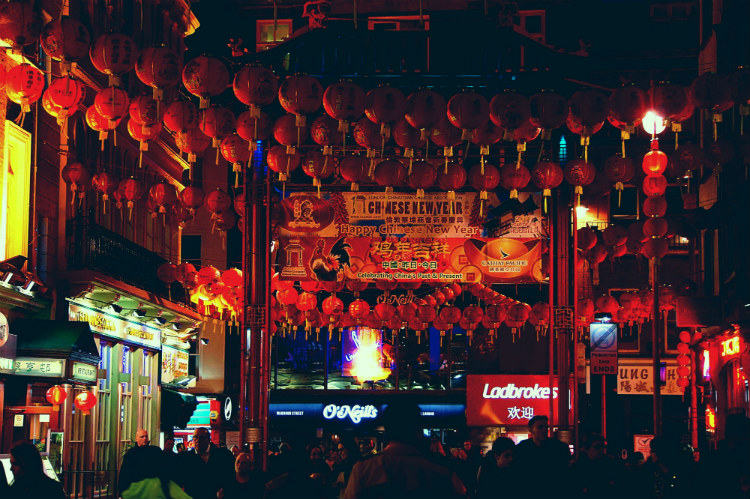 It's safe to say that every city in China will offer a unique and incredible insight into how Lunar New Year celebrations take place. Locals will typically receive three days off and the cities will be brimming with people and events, making it a great time to visit Hong Kong amongst other Chinese cities.

In 2019, the traditional lion dancers and dragon parades will be rumbling throughout the city from early February to the end of the month. Key areas and landmarks where you can see these include the Hong Kong Observation Wheel, Ngong Ping Village Square, Times Square Hong Kong, Lee Tung Avenue and shopping centres.

Lion dances and dragon parades are an essential element to the Lunar New Year celebrations. The Lion Dance is performed with two dancers, one each at the head and tail and involves remarkable agility and synchronisation. It's said to bade away bad luck, cleanse the area and bring good fortune - making it a popular request for many businesses today. The Dragon Dance requires more than a dozen dancers, where the dragon's body is held on poles and the dancers create movement through moving the poles up and down.

With Singapore's melting pot of nationalities and cultures, Lunar New Year is highly celebrated. International residents fly home to socialise with family and friends, and the city comes together to mark the occasion.

Many head to the marina, where you can find the River Hongbao festival that's been celebrated annually since 1987. Taking place at Singapore's floating platform, NS Square, the festival will run from February 3-10, and host a series of vibrant installations, giant lanterns, delicious foods and pyrotechnic displays.

From February 15-16, a vibrant street carnival named the Chingay Parade can be found at the Formula One Pit Building by the Marinas Bay Waterfront. 'Chingay' is drawn from the Chinese word 'zhuangyi' meaning, 'the art of costume and masquerade'. Said to be Singapore's answer to Mardi Gras, it celebrates the city's multicultural heritage with animated displays, music, instruments, colour and more, to create the largest street performance and float parade in Asia. Since 1972, there has been a ban on firecrackers and fireworks, however the Prime Minister the late Lee Kuan Yew encouraged the vivacious atmosphere and costumes to compensate for the ban, and scare off evil spirits as was custom. 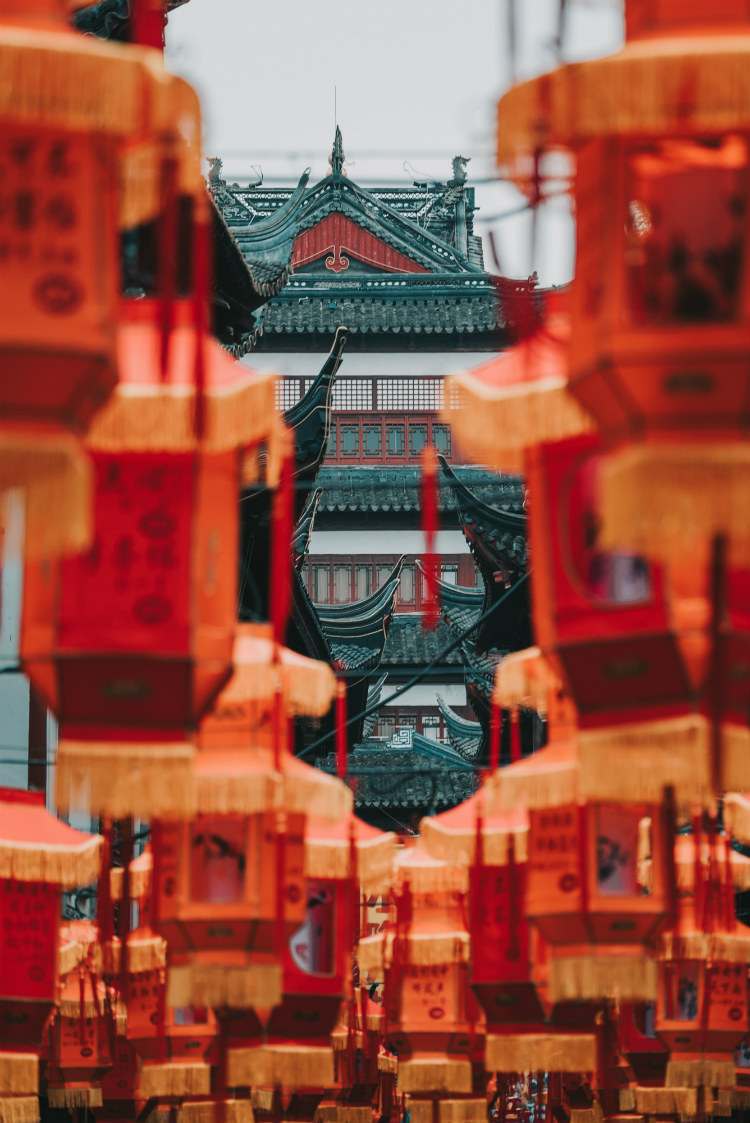 This year embrace Lunar New Year and celebrate the Year of the Pig in cities around the world. With a Latitude 28° Global Platinum Mastercard you can enjoy free Global Wi-Fi, no foreign transaction fees on purchases and no annual fee - features designed to help you explore the world and collect memories, not fees.

If you can't quite make it to an event near you to immerse yourself in the traditional festivities, like the red lanterns, Lion Dancers and Dragon Parades, try taking on the principles of the event by getting together with family and friends, incorporating red, or cleansing your wardrobe and home.

Find out which Chinese zodiac sign and animal you're associated with by checking it against your date of birth. You'll discover your prophecy, including what the year can hold, finding love, your key personality traits and careers meant for you. With any luck, the Year of the Pig will be your year!