Are you looking for an off the beaten track adventure? Consider Egypt for you next holiday - filled with ancient history, impressive temples and sacred tombs, it's the perfect place for curious travellers.

If you're travelling here for the first time, check out our recommendations for some inspiration on where to visit on your ultimate Egyptian adventure.

The capital of Egypt is not one to be missed with its vibrant energy and countless attractions. Packed with cultural foods, ancient artefacts and historic monuments, Cairo is an exceptional destination to tick off the list. Located on the banks of the Nile, Cairo's city is split between the old and new, skyscrapers at one end and old desert ruins at the other, separating the business end from the outskirts of the city. At its core lies Tahrir Square and the Egyptian Museum, brimming with tens of thousands of antiquities, all with a story behind them.

When shopping in markets or eating out in any Egyption city, tipping is such an important part of their culture. Many shop attendants may rely on tipping for their income, however may not appear so, appreciating the discreteness of tips when given. Also note that tipping standards vary from city to city. Don't feel pressured to tip if the service is not up to scratch, only tip what you feel is right.

Tripadvisor users suggest the below tipping amounts when travelling around Egypt:

Now that the nitty-gritty tipping business is out of the way, you can start discovering the wonders of Egypt!

First stop, the Pyramids of Giza. The Giza Pyramids are considered one of the most spectacular sights in the world. The monumental tombs were created over 4,500 years ago and are relics of Egypt's Old Kingdom era. All three of the pyramids were constructed for Egypt's pharaohs who would become gods in the afterlife. These pyramids were filled with treasures and riches they'd need in the afterlife. These treasures have since been discovered by archaeologists and are now preserved in different museums around Egypt. We highly recommend a trip to the Pyramids of Giza on your next trip to Egypt - there's just so much ancient history to discover and learn.

Tour of the Nile River

The Nile is the longest river in the world, and a must-see first-time Egyptian travellers. The Nile is approximately 6,650 km in distance, and stretches through some of Tanzania, Uganda, Ethiopia, Sudan and Egypt. The Nile River was an important part of Egyptian settlement, and is featured and mentioned in ancient Egyptian myths. There are many tours of the Nile River to choose from, whether day trips or overnight experiences. You can check out Tripadvisor for their recommendations, such as a three-hour Nile river cruise in the evening, or a one-hour private boat tour of the Nile.

Luxur is located approximately a one-hour flight south from Cairo, on the east bank of the Nile. It is often referred to as an 'open-air' museum, with many monuments and tombs on display. These ancient monuments can all be experienced at a small price, and can also be viewed from afar. Luxor not only offers access to the Valley of the Kings, but you can also explore its two main temples on the east bank: Karnak (the Karnak Temple Complex) and Luxor Temple. Another favourite is the Temple of Seti I, a mortuary temple. 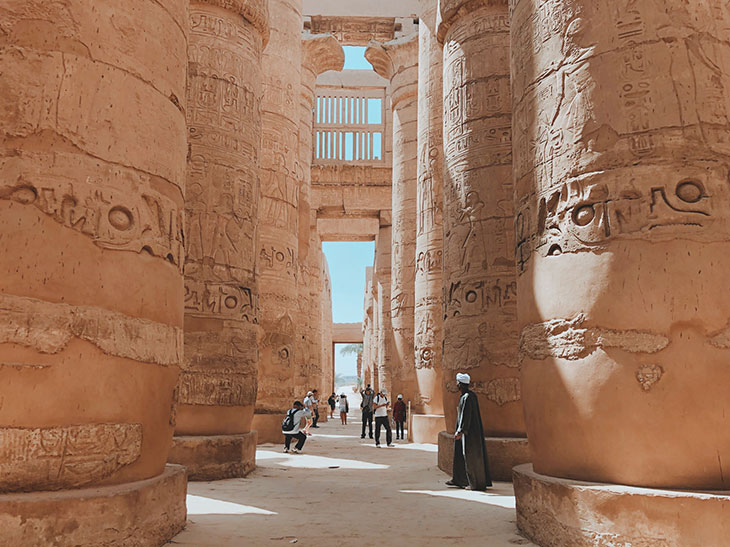 Valley of the Kings

The Valley of the Kings is a remarkable attraction, with walls of rock towering over travellers. Also known as the "Gateway to the Afterlife", the Valley of Kings was built during the Egypt's New Kingdom (1539-1075 B.C.) to be a royal burial ground. There are a spectacular 63 tombs to be discovered by the curious tourist. The royal burials have been around since 2100 BC, and is truly a historical site not to be missed. You can access all of the tombs for a few simple fees, with extra tickets to see the tombs of Ay, Tutankhamun, Seti I and Ramses VI.

Located in Cairo, the Egyptian Museum plays host to some 120,000 ancient artefacts. There are so many artefacts that thousands are required to be in storage, with a representative amount on display. You can check out what costs to expect for the major attractions from another traveller who shared their experience on TripAdvisor. Note these are displayed in Egyptian Pounds (EGP), where one Australian Dollar equates to approximately 12.11 EGP.

Travelling to the main tourist areas of Egypt, such as Cairo, are generally considered safe, however it's best to keep an eye on the Smart Traveller website for the current advised status for travel. Visitors are advised to always be aware of petty crimes like purse snatching, and be careful when venturing further into the desert. Women travelling alone can attract a lot of unwanted attention in Egypt and other areas of Africa and the Middle East, so travelling with others or booking guides is a way to avoid this. The Smart Traveller website also has a section on travelling as a female traveller, solo or otherwise, as well as Lonely Planet.

As with travelling to different parts of the world, there can be many rules around what's culturally acceptable, for example clothing, so make sure you read up on your destinations before packing.

If you enjoy "travelling back in time" on your adventures, why not see what the ancient city of Athens has to offer?