Any frequent flyer will know the price of flights changes a lot over time. Several studies of travel data have provided insight into the best time to book flights, and while many travellers believe last-minute flights to be the cheapest option, the data shows that this is far from true.

One comprehensive study by American analysts Cheapair found a last-minute flight costs about US$200 more than its average price, and $350 more than its cheapest flight. So when is the best time to book flights? Find out below. 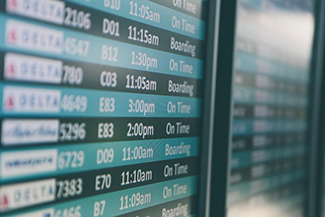 Skyscanner Australia crunched the details of more than 250 million flights to come up with some surprising findings about the best time to book flights.

November is the cheapest month to travel in while December is around 20% more expensive than the average price. On average, 17 weeks or 119 days before departure would save the traveller about 5% off the cost of the average fare.

Domestic travellers could make savings of up to 25% by booking flights between Melbourne and Sydney four weeks in advance, while 15 weeks was the best time from departure for those travelling between Perth and Melbourne.

American analysts Cheapair analysed 1.3 billion domestic US airfares and three million trips to find that, in 2015, there was a ‘prime booking window’ of between 112 and 21 days before departure. If you’re looking for the cheapest time to book a flight, it’s 54 days before departure. Cheap flights might be found before or after that date, but there is no magic number you can rely on.

Of those three million flights, around 30,000 of them were the cheapest the day they went on sale. Once you’re inside 14 days before departure there is a sharp increase in price.

When you’re looking for a cheap overseas airline ticket, finding the best time to book flights involves far more variables than domestic flights. The most important factor is your destination. Skyscanner Australia found that a flight to New Zealand is best booked six weeks in advance. If you want to head to the US though, 28 weeks out will, on average, net you a saving of 23% or around $465. Similar savings can be found if you book a flight to China 30 weeks before your departure.

Taking in the tourist season

Away from the number-crunchers, there are a lot of factors that can go in to making a cheap flight. Firstly, are you going in high or low tourist season? Typically, high season is summer and low is winter. There can be a huge difference between the cost of flights from Australia to Europe from February (low season) and July (high season).

So if you plan ahead, keep an eye on the prices and remember these timeframes in order to get cheap flights for the best price possible.