8 Crazy Things You Can Buy Online

Once, shopping was confined to what you could find at the shops down the road. Then, the Internet was invented and shopping online became a thing. Here are 10 crazy things you never knew you could have home delivered.

Yes! As seen in the Netflix series Master of None and the Guinness Book of World Records under the heading ‘World’s most therapeutic robot’, PARO, the therapeutic robotic baby seal. PARO comes not only with large brown eyes, a fluffily lifelike coat and the voice of a real baby harp seal, but the results of multiple scientific studies proving he stimulates interaction, inspires motivation and reduces stress. This is just what your partner will need once you tell them you’ve just spent $6000 on a robotic seal.

If you’ve got the coin, Millionaire’s Concierge can get you serious facetime with someone far more famous than you. Ever wanted Jon Bon Jovi, Leonardo di Caprio or Carmen Electra to come over to your place and just hang out? Now you know how to make it happen.

3. A wake up call from Dwayne ‘The Rock’ Johnson 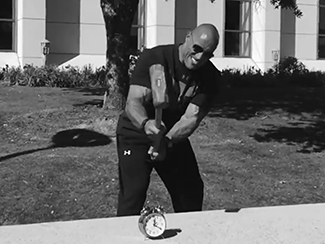 Ever felt your life goals were out of reach? Ever felt like you just needed an extra something in your life to get there? Well, The Rock knows exactly how you feel and wants to help you with that. By shouting motivational phrases at you. His motivational alarm clock app is everything being gently shaken awake by your mother isn’t.

In what must rank as one of the most environmentally friendly methods of transport since the bicycle, the HumanCar is powered by a blend of human and electrical energy, meaning four people can sit in it and drive it like a four-person bicycle. While you can’t buy one outright, you can reserve one with a $99 down payment.

Everyone knows that vinyl is back in a big way, but here’s a chance to pre-empt the next phase in obscure records. Impress every nerd and hipster with this authentic recording of a Japanese steam locomotive. Over both sides of this original 80s pressing, the ‘Fiji’ sleeper train runs at various speeds, idles and toots its horn. One in a series.

6. Someone to stand in a line for you

While this hasn’t taken off in Australia yet (it’s already a legitimate profession in New York) you only need to walk past a shop on the morning a much-hyped game, electronic product or complex carbohydrate-based snack goes on sale to see that people would be very willing pay someone to hold a spot in a queue for them. At present, the going rate is US$10-25 an hour. Currently, good money can be made securing and delivering cronuts, at Comic-Con and in the line for Broadway hits.

While you can’t buy a star outright, several organisations will be only too happy to name a star after you, and provide you with memorabilia to let strangers and friends know of your astronomical namesake. Even if those Pluto-denouncers at the International Astronomical Union won’t be using your name to refer to the star, instead preferring to use long strings of numbers, you can truthfully say that there is a star named after you.

8. Water from the Fountain of Youth

You’d be mad to turn down a chance to sip on this. For the person who has everything, or nothing at all, try water from the Fountain of Youth. This is the very same fountain that syphilitic Portuguese explorer Ponce de Leon was looking for when he accidentally discovered Florida. Buy it by the bottle or shot glass and watch your better years unfold