10 Best Beaches in the World to Visit

The number one most inspirational image for travellers is a beautiful beach. A single image of palm trees and lapping waves can be all it takes for some people to make the decision to take a break. If one picture can inspire big decisions, how about ten? Listed below are ten of the best beaches in the world.

Few beaches are as remote and as remarkable as Anakena Beach, on Easter Island. You get palm trees, blinding white sand and pristine waters aplenty. In fact, the only thing that could take your eyes away from one of the world’s most beautiful beaches is a sight as unique as the Easter Island statues that watch imperiously over the beach. Other beaches will offer shipwrecks, coral reefs and luxury resorts, but only Anakena matches beauty, isolation and millennia-old mysteries with a trip to one of the best beaches in the world.

How to get there: LAN Airlines flies daily to Easter Island from Santiago and weekly from Papeete (Tahiti).

While it’s hard to just pick one beach in the Caribbean, Barnes Bay in the luxury resort haven of Anguilla is hard to beat. There’s are very good reasons four- and five-star resorts congregate on Anguilla as many of the nearby islands and their beaches are what bring the resorts and the people. Barnes Bay, like many of the beaches on Anguilla, have avoided the ravages of insensitive tourism and boasts gorgeous sand and warm waters with shipwrecks and plenty of marine life. Sometimes a beach is best appreciated from a balcony, deckchair or hammock and Barnes Bay will be just as picturesque from any of these.

How to get there: Ferries and airlines connect Anguilla to major Caribbean ports and North American cities. If you’re travelling from Europe, flying to the nearby French island of St Martin can be the quickest and cheapest way. 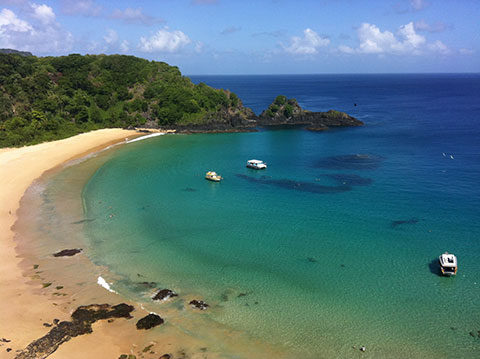 Known to Westerners as Sancho Bay, plenty of travellers and Brazilians know this cove as one of the best beaches in the renowned Fernando de Noronha region. Hidden from the rest of the country by thick rainforest and looming cliffs, Baia do Sancho lures visitors with pristine sands, clear emerald waters and its coral reef over which dolphins regularly swim. Accessible by boat from nearby Porto Beach or via a steep descent through a long, winding series of stairs, Baia do Sancho is without any tourist facilities so it’s best to plan for a full day. Recipient of TripAdvisor’s Most Beautiful Beach award, word is getting out so go soon.

How to get there: The nearest airport to Baia do Sancho is Fernando do Noronha where connecting flights from Brazilian airlines Gol and Azul arrive daily from Recife and Natal. During high season, CVC runs 4-6 day cruises from Fortaleza, Natal and Recife.

How to get there: Coral Bay lies around 1,100 kilometres north of Perth, an 11-13 hour drive. The easiest way to get there is to fly to Perth and take a connecting flight to Learmonth where you’ll need to hire a car or arrange for a shuttle service to take you from the airport to Coral Bay. This can be done by contacting the Coral Bay visitors’ centre. 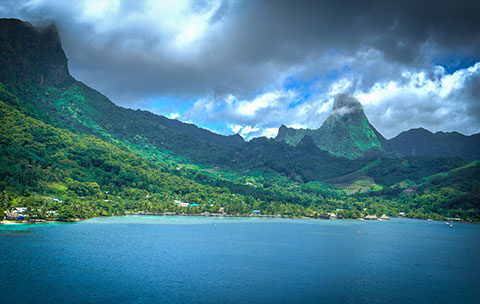 Bora Bora has been a fixture of the public imagination for so long, it’s easy to forget that it actually exists. A lot of tropical islands offer swathes of pristine beach, but few other islands can offer the combination of climate, luxury, and purity. The clientele you meet at the island’s resorts are likely to be well-heeled, but once you hit the beach, and the sight of the forested spire of Mount Otemanu towers in the background, warm turquoise waters lap nearby and palm trees lift the breeze, you’ll be feeling a million dollars.

How to get there: The nearest international airport is at Papeet, on the main island of Tahiti. Air New Zealand, Air Tahiti Nui, Air France, LAN and Hawaiian Airlines all fly into Tahiti. From Papeete, Air Tahiti flies to Bora Bora Airport.

While England certainly doesn’t boast palm trees or tropical breezes, it does do windswept beaches full of character better than almost anywhere. In the case of Bamburgh, not only do you get all the atmosphere of a Gothic novel, police procedural or lovelorn melodrama, you also get the looming presence a genuine castle. Bamburgh Castle has been restored to exceptional condition since it served as a Norman stronghold and the royal seat of the Kings of Northumbria with all the vaulted ceilings, stone spiral staircases into Rapunzel—like towers and copious film credits to support its claim as one of the great castles of England with its winding beach one of its greatest assets.

How to get there: The nearest international airport to Bamburgh is Newcastle, though you can also take a three-hour train trip from London’s Kings Cross Station. Plenty of other train services can take you to Morpeth, the nearest station and sizeable town.

One of the most photographed beaches in Africa, this, perhaps more than any other beach on this list, is the classic holiday beach. In fact, readers of a certain age may recall its feature role in an advertisement for the Bounty chocolate bar. Lingering palm trees, white sand, huge granite blocks at its back to the wind to a breeze and crystal clear waters that sometimes attract sea turtles. It’s a photo that could launch a thousand holidays. Source d’Argent can be accessed via ferry from Seychelles’ main island, Mahé and from there an ox cart or bicycle can take you to. The beach disappears at high tide and it can often get busy around midday so morning is the best time to visit. A small entrance fee is payable for non-residents, one of the best uses for a few dollars you’ll ever find.

You don’t have to be an Italophile to argue that Sardinia has some of the best beaches in the world. In the Mediterranean, even the French or Greek wouldn’t argue too hard against it, and while the island of Sardinia is ringed with photogenic stretches of sand, Spiaggia Rena Bianca is the island’s crowning jewel. While the aquamarine waters and the multihued sand (once carted off by the truckload for aquariums) are big drawcards, and the nearby mountains attract climbers and shipwrecks lure divers, it’s the setting that really makes Rena Bianca. Italian families will be crowding the beach from July to August but it’s a place worth visiting any time of year.

How to get there: Caligari Elmas is the island’s main airport from which you can get regular flights to major Italian cities. EasyJet and British Airways offer flights from major English cities. Alternatively, ferries run to Spain, Italy and France. 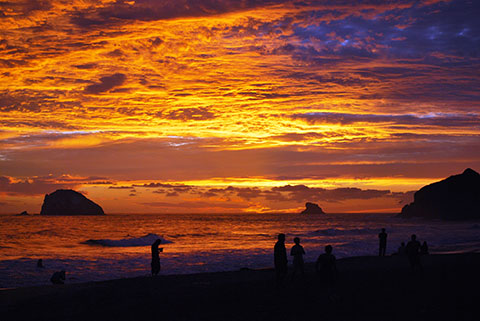 For years Zipolite was known only to curious Mexican and adventurous surfers. The perfect “secret beach”. Over the last decade, its reputation has grown slowly by word of mouth, but it’s growing because it’s something special. Remote, wild, idyllic, visited by dolphins and the occasional passing whale, it’s a beach you’re likely to see a young local riding a horse along, a pair of honeymooning backpackers, and some surfers who arrived a month ago and are unsure of the date. Still remote enough to keep casual travellers on the Cancun side of the country, it’s a hidden paradise for beach lovers that is probably too special to even be on this list.

How to get there: The nearest airport is Huatulco from which you can get a connecting flight from Mexico City or Oaxaca. If you’re already in Central America, another option is to bus to Pochulta, the nearest major transport hub, or Oaxaca.

Croatia’s Dalmatian coast is lined with gorgeous beaches and has long been the hidden secret of the European sun worshippers. On the Mediterranean side of the Croatian island of Lopud lies Sunj, the archetypal “pretty European beach”. Bright parasols, happy families, fine sand and shallow water perfect for paddling make it an ideal beach for families. Those with naturist tendencies can take advantage of the clearly marked nudist section of the beach to the north while ramblers will want to explore the picture-perfect Mediterranean countryside. It’s all a short drive from the walled city of Dubrovnik, one of the world’s most picturesque locations.

How to get there: Daily ferries make the one-hour trip from Dubrovnik to the island of Lopud and unlike many beaches on this list, you can make a day trip of it.